There is Bad Roleplay out there, but there are also bad roleplaying games, too. Online especially, where free board hosts enable just about anyone to create a forum roleplaying game, you can find a multitude of bad RPGs. There are some warning signs for bad RPGs, though — if you know what to look for.

Forum Roleplay is of the opinion that only bad staff can make a truly bad RPG. RPG admins make or break their roleplaying games, plain and simple. A poorly organized game is “bad” — but in an entirely different sense than the RPG that bans ICly talking back to an RPG admin’s character.

How Does the RPG Staff Interact?

This is the most important aspect of investigating a potential roleplaying game. Bad staff can ruin even the most wonderful of plots and the best forum roleplaying communities. Bad staff can be mean, unforgiving, or just plain rude. If you join a game operated by bad RPG admins, you may be banned (and thus lose all your writing, character development, etc.) for no reason or for a very minor infraction.

How Active Are the Staff?

You will always also want to look at the staff’s activity. The nicest people can be inactive, unfortunately, and RPG admin slowness is one of the biggest causes of forum roleplaying game death. How fast does the admin attend to joiners, questions, requests for things, and so forth? If the answer is longer than a week, you may want to look elsewhere. The game is unlikely to survive long-term. If players don’t stop coming, a technical issue may kill the board, and the admin may not have the time do all the revival work.

Does the RPG Admin Have a “Reputation”?

Some forum roleplaying game admins jump from one game to the next. They have many ideas for new games, but seem to lack the drive to stick with a finalized game. Their kink is world-building, and once that’s done, actually operating the game is not that interesting to them.

You don’t want to join these games. This RPG admin probably isn’t a bad person, but you shouldn’t devote your time and energy to something that will just die in a few months (or whenever the administrator gets tired of it). It can be difficult to recognize RPG admins by name alone (especially given how easy a name is changed online). Look at their e-mail address, the style of the site and graphics, the writing style of the information — similarities often exist.

What Kind of Characters Do the RPG Administrators Play?

See what kind of characters the RPG admins play. Look at how frequently they post, and how they seem to treat their characters (important versus not very).

This depends heavily on the game — games with an original setting and original characters may not have “important characters” and so how much (or little) the RPG admin pays to the IC aspect of the game isn’t important. This can also be a tricky aspect (especially for newcomers) to evaluate. Sometimes, staff gets to play the key characters simply because they’re dedicated, active, and have shown long-term reliability.

However, in certain settings — staff who play a lot of “key” characters in a given roleplay (Harry, Hermione, and Ron in a Harry Potter RPG; Rick in an RPG for The Walking Dead) but aren’t very active with those characters are looking for players to play with them. These administrators may have created an RPG because they wanted to be its “star.” You should avoid games like this — the administrator is likely to be possessive of their characters and poorly motivated to create a welcoming experience for his or her roleplayers.

Why Should You Care About Administration, Anyway?

Why should you care about bad RPG administrators? If being banned for little/no reason isn’t convincing, consider that when you post to a forum, the administrator can see your IP address. Depending on their technical prowess and desire to inflict harm, this could be a bad thing. Most RPG admins will only know how to look up your IP information (where you live and what kind of internet service you use) — but that can be pretty scary, in and of itself.

It’s not only about keeping your writing and characters safe — it’s about you being safe on the internet, too.

How Is the Board Organized?

If you’re looking at a thousand empty forums, you’re looking at a poorly organized game. The information will be difficult to find, and you may break rules you weren’t aware existed — simply because the rules information is hard to find. Poorly organized games aren’t necessarily bad — but they’ll be harder to use, especially if you’re not used to forums. The same can be said of roleplaying games with bad forum skins. If you have poor eyesight, staring at that 10px Verdana all day is not going to be a happy thing for you.

What Kind of Forum Software Are They Using?

If you are not technically inclined, it can be tough to tell what kind of board you’re looking at. Scrolling to the very bottom of the forum index usually reveals the forum software — “this board powered by phpBB” or something similar. If you can’t find this information, don’t worry too much about it. It is usually not a make-or-break aspect of RPGs.

This is extremely subjective after you get to a certain point — MyBB, phpBB, Invision Power Board, and other “powerhouse” forum softwares all offer virtually the same features. The same can be said of most free forum hosts.

However — if your RPG is using something like an advertising-supported, free software such as boards2go, know that the software is more difficult to operate, especially for newcomers. If you’ve never heard of the software they’re using or you find information that it was last released in 2005, you may want to run away. The board’s security and operation are likely to be compromised and any personal information you enter into the forum may be compromised.

So, find a bad RPG? That’s fine — just leave it alone. Don’t try to offer criticism or critique. If you must, phrase it carefully, and be prepared to be cursed out, banned, or even followed from forum to forum and badmouthed. Some individuals look for any excuse to start drama — you can find people like that anywhere, in reality and on the Internet. No surprise the potential exists in roleplay, too.

If you absolutely must point out something the RPG is doing wrong (stealing images or a layout directly from another forum), Forum Roleplay again urges you to consider other avenues. Instead of pursuing the thief yourself, contact the original forum theme owner and let them know what’s going on. You don’t know if the original owner gave them permission, for example, and you could be starting drama yourself.

Some guides are offered as unstyled, standard HTML pages. They can be posted to a forum or reuploaded to your own web server. Forum Roleplay prefers and recommends embedding a link to the guides pages themselves. This ensures you get the most updated version of the guide (good for you). It also keeps outdated copies material from circulating around too much (good for Forum Roleplay). Other guides are available in infographic format. 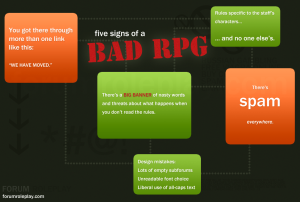 I’ve been producing and sharing forum related roleplaying resources since 2009, all completely free of charge. If you want to give back and help me pay hosting and server maintenance costs, you are awesome and I thank you greatly! ♥