Forum roleplaying is a great hobby. It’s free, it’s creative, and it’s a highly social activity. If you’re interested, read on for examples of forum roleplay and some essential starter’s information.

Roleplay is assuming the role of a character and writing, acting, or playing as that character would. There are many forms of roleplaying: gaming console, live action roleplay, tabletop roleplay, text-based roleplay, forum roleplay, and on and on.

What is Forum Roleplaying?

The actual roleplaying happens through text. Roleplayers write responses to one another through posts. Each post describes the character’s actions, speech, and thoughts. Forum roleplay is often called play-by-post roleplay.

Note that play-by-post roleplay does not always take place on a forum. With the rise of social media, Tumblr has become a large roleplaying hub. Livejournal has always hosted roleplaying communities, too. Forums are still a popular way of organizing roleplaying games, however.

How Does Forum Roleplay Work?

When you roleplay, you assume the role of a character. A character is made-up entity created for roleplaying. You create a character (a person, animal, demon, alien, or whatever is appropriate for your RPG setting) and write from their perspective/role. Your character isn’t you, and you aren’t your character — you’re separate entities. You can think of it like an actor in a movie — the actor is not the character. Johnny Depp is not Captain Jack Sparrow, Mort Rainey, or John Dillinger.

An Example of Forum Roleplay

Alice (a roleplayer, as Baphomet): The hours nearest dawn were the worst for Baphomet. He hated the thought of going underground, he hated where he slept, and he hated the many dreary hours between the closing of the coffin and the rising of the moon. Gray dawn was creeping ever nearer. Even its palest beginnings of light stung his eyes. He scowled.

You (as Azazel): New as she was to the vampire clan, Azazel was already comfortable with her fellow vampires. It was always like that for her — she just melded, wherever she went. Adaptability all but ensured her long survival. There was one exception, though. That exception stood directly in Azazel’s path to sweet darkness. The slim vampire shifted her weight from one pale leg to the other, unsure what she might say to placate the dark-tempered elder. Too late, she realized he would hear even that minute movement.

Alice: Baphomet’s head swiveled around, almost serpentine. He glowered at the new-made vampire — she was young and arrogant as they always were. Their skin was as soft and fleshy as a humans, yet they always thought of themselves as gods and goddesses. “Yes? Am I in your way, little girl?” the vampire asked. He might have tainted the question with coy sweetness if it was not so desperately near to dawn.

And it goes from there! Later in the thread, Azazel and Baphomet might end up fighting, or creeping into a coffin together, or making plans to hunt later that night, or getting stuck outside of their nest, or…

Generally, posts will be much longer than the provided examples. Some roleplaying games have word minimums, a requirement for you to write a certain amount of words within every roleplaying post. You can find roleplaying games without minimums or with very high minimums.

Forum Roleplay isn’t a fan of huge word minimums (800-1000 word minimums generally mean you’ve found a very advanced RPG — or a very silly one, depending). However, it can be helpful (especially for novice writers and the youngest roleplayers) to strive for 200-300 words per post.

Realism is an important aspect of creating a flowing storyline. Even writing novels — if you create a world with rules and then break those rules later (especially unintentionally), it irritates your reader. Roleplay realism is not exactly like real life realism. A game based in the year 5392, with space travel and highly advanced technologies, has different rules of realism than a forum roleplaying game set in 1930. Realism is especially important in forum roleplaying because many people are writing in the same universe.

This could be an interesting plot if it was due to misdirection on Baphomet’s part or a secret scroll Azazel discovered. However, if unresolved — this might lead to confusion later (especially if the players do not remember who was correct). Re-reading old posts might lead to even more confusion.

In order to be successful in a forum roleplaying game, you should know your RPG’s acceptable level of realism. If you don’t care about realism, you can always find a simpler, freeform game. However, in some of the most complex forum RPGs, realism is very important.

Writing in A Collaborative Environment

OOC Does Not Equal IC

One of the most important things to remember in forum roleplaying: your character can be different from you. Many people say your character should be different, and that it’s the best way to roleplay. New roleplayers find it easy to create “themselves” as characters. This can very easily lead to destructive roleplay behavior, though! For example, a player with a self-character may take offense at another character disliking the self-character.

It is important to remember that for your character’s actions, there are often consequences. Though it was a fun plot when your character suddenly snapped, your RPG group leader may not approve. This plot could end up with your roleplay character being kicked out (in a Limited Consent game) or killed (in a Non-Consent game).

Don’t expect to be able to do whatever you want at all times. If you roleplay, there are other people playing, too. If your character does something, other characters will react. Some roleplaying games have courtesy policies requiring at least cursory discussion of certain plots. If you do not extend this courtesy to others before plotting something out of the ordinary, you may end up with some unintended or unwanted consequences.

It is also important to remember that your character is not the central point of the plot at all times. Don’t join a thread where there is clearly something going on between the other characters and expect everyone’s focus to shift to your character. Play to the story; don’t expect others to gravitate toward or even care about your character in any particular moment.

Azazel: The coyote leaned over his mother’s grave, his ears folded back and his expression somber. There was not an ounce of happiness within the man. She didn’t need die, he thought, again and again.

Baphomet: He wandered toward the other wolf, clearly distraught. “I lost my favorite bag, man,” he said. This was his absolute favorite possession and he really wanted it back.

This would be really rude in real life — it’s also really rude in roleplaying. If a player has a particular idea or plot in mind, reply only if you’re interested in shaping that storyline with them.

There are usually different types of forum roleplaying threads:

If you’re brand new to roleplaying, please see the Bad Roleplay Guide. These are very important aspects to avoid when learning how to forum roleplay. 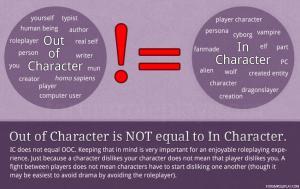 Download the IC/OOC infographic so your players keep in mind: In Character and Out of Character are separate realms best kept separate. Download IC and OOC Separation Infographic

I’ve been producing and sharing forum related roleplaying resources since 2009, all completely free of charge. If you want to give back and help me pay hosting and server maintenance costs, you are awesome and I thank you greatly! ♥